The Sounds of Nature 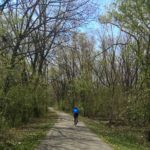 I took up running many years ago. I’m not really sure why, though. Perhaps it was to combat aging and weight gain, or perhaps it was a way to alleviate the stresses of my mind. Either way, it doesn’t matter. I ended up enjoying the activity, and I really enjoyed the opportunity to be outside, on a path, in a forest preserve. I still do.

Though, as much as I love to be outdoors, running on a woodsy path, I realized I was only taking in half of what it had to offer. I only took in the visuals. I shut out the audio soundtrack. I’m not a natural runner, so I felt I needed motivation. To get that, I plugged my ears and listened to music. I love music, too. To go out and run a few miles and listen to some favorite songs was a treat for me.

It wasn’t until recently that a friend mentioned that I should unplug and listen to the sounds of nature. At first, I dismissed this because I needed my motivation, of course. I needed my music! How could I possibly find a running rhythm if I didn’t have a constant beat in my ears to help me move along? Then I thought, well I am a nature lover, why aren’t I taking in the sights and the sounds? So, I unplugged.

I went out, sans the music, on a spring day, and I immediately discovered that the forest was laden with the symphonic voices of all things nature. Birds and frogs and geese and insects, and I’m not even sure what else, all provided a wonderful natural choir. It was actually loud, too. As I ran, I listened to my own labored breathing fall into a sweet cadence with the sounds that surrounded me. I was relaxed and running at the same time, which seemed strange to me. I studied the sounds and wondered if they were all communicating with each other. Did one species understand the language of another? Were they warning each other of my approach, or were they marveling at a human as we marvel at them?

Unplugging and listening to the sounds of nature actually helped my visual experience, too. Suddenly, I was a Junior Ranger again spotting squirrels and butterflies and ducks and snakes (yes, snakes). I must have just run past these critters before, too focused on Kelly Clarkson to notice them. I was feeling a different rush as I came to spot even the most camouflaged critters hiding amongst the brush.

I looked closer at the trees I sailed past so many times before. Some were bent, broken, destroyed even. I wondered what act determined their fate – ice storms, heavy snow, lightning strikes, or human hooligans. I noticed some trees were dead, some were barely budding, and yet some were vibrantly alive. All dying and maturing and living in their own due times.

I looked at the forest floor and noticed wisps of purple wildflowers trying to peek out from under the dead leaves that probably served as warmth and protection for the animals that burrowed under them during the long Chicago winter months. It was spring, and signs of life and death naturally overlapped. Yes, disconnecting my music really seemed to connect me with the environment in a way I hadn’t experienced before.

I continued my run, and I began to focus again on listening. The harmony of bird chirps that I wished I could discern melodically played in my ears, and it did provide a rhythm to my running. Sure, I missed Kelly Clarkson, but I found a new sound, and it was music to my ears.