What I Learned About Alaska

I had the opportunity, privilege really, to travel to Alaska two summers in a row. Last year, I took a cruise with my brother and our shared friends, and we traveled to Juneau, Sitka, Glacier Bay, and Ketchikan. While the cruise itself was a great deal of fun, I remember standing on the boat deck feeling like I was just watching Alaska from afar. We did go into a few of those aforementioned towns, but sadly for us, they were covered in clouds while we were there. We couldn’t see the mountains and the glaciers that overlooked those towns, so it was hard to imagine what Alaska looked like up close. Fortunately, there were postcards in the stores, so I could see what I was missing. And man, I was missing a lot. I could feel the mountains breathing around us, but I couldn’t see them. I didn’t feel like I got a feel for the land – the actual land – and I realized that I longed to really be in Alaska.

Upon returning, I had another group of friends who voiced their desire to also visit The Last Frontier. Immediately, I shrugged it off thinking, “I can’t go to Alaska two years in a row,” but just as quickly, I followed with, “Why the hell not?” This time, though, we decided to do a land package instead of a cruise. This, I thought, will satiate my desire to be in Alaska! And I was right. It seemed as if we lived out our own version of “Planes, Trains, Automobiles, Boats, Rafts, and Buses,” but by golly, we saw Alaska as we traversed our way from Anchorage to Fairbanks!

After my two trips, and with the help of some very informative travel guides from Gray Line Alaska and Princess Tours, I learned quite a bit about Alaska, and I’d like to share some of those thoughts.

It’s Green! I know it’s summer, and everywhere else is green, but I didn’t expect Alaska to be as green as it was. I pictured granite mountains, white mountains, snow capped mountains. Certainly, not green grass, green foliage, and lush green landscapes that rolled out from under those granite mountains. The colors in Denali National Park alone are unbelievable. There were sprawling beds of moss that served as the foothills to those granite and glacial landscapes. The view from Polychrome Pass treats the onlooker to colorful volcanic rocks, glaciers, vegetation, streams, and mountains, all combined in one view. It’s breathtaking! Don’t go thinking Alaska looks all white and frozen, it doesn’t! 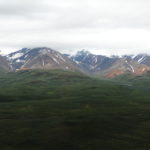 It’s the Land of the Midnight Sun, 1am sun, 2am sun, 3am sun, etc. Okay, so this one I sort of knew, but still it amazed me. I thought there would be about 3 hours of darkness per day while we were there, but that never happened. There was always light peeking through the shades while we slept. I took pictures of Mount Denali at 11:00 pm one night, and it’s the sun that is most prevalent in the picture. At 11:00 at night, the sun was blinding! It’s tough to go to bed and bid goodnight to such beautiful sights when they are still visibly performing for you.

The Northern Lights aren’t so rare. The town of Fairbanks sees the Northern Lights on average over 240 days a year! I wanted to reference the Midnight Sun (above) to also help to emphasize this fact. You can’t see the Northern Lights in the summer, but you must be able to see them quite frequently throughout the rest of the year. I always thought seeing these dancing lights would be a rarity – a once in a lifetime, lucky strike, chance occurrence. Turns out, it’s not that rare. Just don’t visit Alaska in the summer, and it seems you have pretty good odds of seeing them at other times of the year! If it’s a bucket list item, it’s very doable!

The roads are less traveled. Only 20% of the Alaskan landscape is accessible by road. In a land so vast (it’s bigger than Texas, California, and Montana combined), this statistic startled me. It also made me feel like I could rent a car and drive Alaska on my own. Seems like even I won’t get lost in a state that only has 12 marked highways! I know, I know….there are other things to consider, but still, only 12 highways?! Give me that map!

It makes plane sense. One out of every 78 Alaskan residents is said to have an active pilot’s license. Since I now know that only 20% of the state is accessible by road, this makes complete sense! It’s my, “Of course!” moment.

There’s a Texas Rivalry. I wasn’t aware of the rivalry that appears to exist between these two states, but it’s there and it’s prevalent. Just look up “Isn’t Texas Cute?” t-shirts and you’ll get the picture. Literally. Alaska is more than two times larger than the Great State of Texas, and they make sure to let the Lone Star state know that. There were many t-shirts, banners, wall decorations, etc. taunting Texans, and the humor behind the rivalry made me laugh. (Sorry, Texas).

It pays to live in Alaska. Ummm, that’s literal too. Alaska’s Permanent Fund Dividend pays it residents for being, well, residents. Last year, each resident received over $2000 just for living there. I can’t begin to tell you how that contrasts to living in Illinois.

It’s not just for Bucket Lists. Most people say that Alaska is a bucket list item – I was one of them. We all said, “It’s too big.” “It’s too expensive.” “It’s too far.” And it is all of those things, but I would remove the “too.” It’s big, sure, but you don’t have to see all of it! You need only see a fraction of this state to take in its beauty and its wild milieu. Sure, there are eight national parks, but plan to see two or three of them. While it is expensive, it is not prohibitive. Plus, if you make arrangements for a land package through a cruise line (we used Princess), you can pay for the trip in installments. Lastly, I suppose distance is relative to where you live, but my point is it really isn’t too far. From Chicago, we took a direct flight into Anchorage, and it was about 7 hours. A Double Feature and a nap and you’re there! So, don’t leave Alaska on a bucket list of things you really think you’ll never do. Plan for it. Don’t let its size, cost, or distance scare you away. It really is something to see! 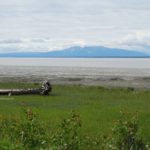