I recently posted a photo with a caption that read, “The Inspiration Continuum.” It was a picture I took of an unknown woman who was sketching a waterfall at Yosemite National Park. I was inspired by her inspiration to create art from something that obviously inspired her. It made me see that inspiration is a continuum, and really, we just never know where it stops.
The woman in the photograph never knew I snapped her picture, and she is not aware that she inspired me. Plus, neither of us is aware if my post of her inspired anyone else. The great thing about inspiration is that it stirs people to do something, which often impacts someone else, and then inspires them to do something. It is far-reaching and may even be un-ending.

Last year, I read a book called Grandma Gatewood’s Walk, by Ben Montgomery. The story of this remarkable woman is a great example of the Inspiration Continuum. An inspired writer penned a biography of her, the book became a New York Times bestseller, the woman regarded as the “Hiking Granny” has trails named in her honor, and myriads of people take to foot and hike in her honor each year. As they share their pictures and stories, I’m sure the inspiration goes on. And on. Personally, I just returned from a trip to Hocking Hills State Park in Ohio, which was one of Grandma Emma R. Gatewood’s favorite places to hike. In her eighties, she led an annual hike through “Old Man’s Cave,” which to her, was more scenic than the Appalachian Trail. Yes, I was inspired to see it for myself, and I wanted to walk in the wake of this extraordinary human. And on. Perhaps you may now be inspired to learn more of her, or of her story, or of Hocking Hills. And on. 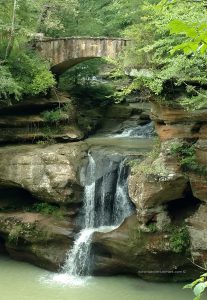 The one sad thing I find about inspiration is that the source of the inspiration never really knows how they impacted someone else. Like the woman that I photographed in Yosemite. Like Grandma Gatewood, or Ben Montgomery. None of them know that they made an impression on me or influenced me to do something. But they did. And on.

We are all instruments of inspiration.

The take-away then is that we must all be aware of our significance. Without our knowledge, we are making an impression, impacting someone, inspiring someone to do something. We are all instruments of inspiration. Most likely, and unbeknownst to you, you have inspired someone. You may have inspired someone by the weight you’ve lost; by the mountains you’ve climbed; by the songs you’ve sung; by the food you cook; by the art you create; by the vice you’ve kicked; by the love you’ve shared; by the kindness you’ve shown; by the work ethic you hold; by the integrity you keep; by the strength you have; by the roads you’ve traveled; by the clothes you’ve worn; by the stories you’ve told; by the lessons you’ve learned; by the kids you’ve raised; by the goals you’ve met; by the advice you’ve given; by the thoughts you’ve shared; by the books you’ve read; by the words you’ve written. Yes, I could keep going. There are so many things that we as humans are inspired by, and therefore, that must mean that we are all inspiring each other. Most of the time, without any knowledge of it. Inspiration inspires inspiration. It is, I believe, a continuum, and you never truly know where it stops. And on. And on.

PrevPreviousTraveling Tunes
NextWhere Will You Leave Your Mark?Next
Menu
Menu