In Search of My Mangelsen Photo

There is an iconic image of a large Alaskan Brown Bear standing, mouth wide open, atop the famous Brooks Falls awaiting the lunch of a sockeye salmon who is flying helplessly toward his impending doom and into the jaws of the bear. It is an award-winning photograph taken by the renowned naturalist photographer Thomas Mangelsen. It is an amazing piece of work, often admired as one of the best ever wildlife photographs, and you should go look it up right now. Just be sure to come back.

Mangelsen’s classic photo, called “Catch of the Day,” has been in my head for several years. Through this photo, I learned of the magical place called Brooks Falls, which is in Katmai National Park in Alaska. I learned it was a place where people could stand in close proximity to the falls and watch the likes of a “Mangelsen Bear” catch spawning salmon as they leaped from the water. I wanted to witness that, and like every other person who dreams to go there, I wanted to snap the same.precise.photograph that Mangelsen did.

However, going to this remote place in Alaska, accessible mainly by floatplane, seemed like a pipe dream. And if just getting there seemed unfeasible to me, the thought of catching a photograph like that seemed wildly impossible. His photograph captured more than just a bear looking forward to lunch. It told a story. That one still photo somehow told a story of an alluring place, a magical place. It certainly didn’t seem like a place where just anyone could go, and it certainly didn’t seem like a photograph just anyone could take. Mangelsen’s photo is so extraordinary it seems out of reach. Much of his audience, myself included, just assumed only a miracle could once again combine the timing and place necessary to make that magic happen again. We just gawked at his craft, his skill, his end product, and we applauded him. In our heads, we secretly dreamed of the “someday,” when the universe would somehow miraculously gift us with such a magical opportunity.

But the universe doesn’t dole out gifts like that. We can’t wait for things to happen to us; it just doesn’t work that way.

But the universe doesn’t dole out gifts like that. We can’t wait for things to happen to us; it just doesn’t work that way. When we say, “someday I’ll get there,” or “it’s on my bucket list,” it’s as if we’re waiting for some miracle to make it happen. That’s why photos like Mangelsen’s inspire us to go places, but also sometimes distance us from them because we believe we could never experience the same extraordinary thing. We feel that what has been so artfully captured on film by someone else could never be recreated for us again.

What we have to do is silence the thought that tells us this is a “someday” goal. We have to allow the “Mangelsen-esque photos” to do what I believe the photographers wanted them to do: inspire us to actually go and see these things firsthand, for ourselves. Mangelsen’s “Catch of the Day” was not set in a make believe world, it was set in a national park. The photo, which required some exact timing, still was not a once-in-a-lifetime moment. Mangelsen’s craft made us feel it was a miracle shot, but it didn’t take a miracle. But it does take actually going there to figure that out.

So, after ogling his envied photograph for years, I finally decided to make my “someday” happen. I booked my trip to Katmai and anxiously awaited the day I would stand on the platform (presumably the same one Mangelsen did) which overlooked the bears feeding on salmon. Getting there required some advanced planning and saving, but not much more than planning and saving for a trip to Yosemite or Yellowstone or some other national parks. Getting there, though, was only part of my dream. The other part was seeing the bears and capturing that coveted picture.

The park service recommends you go in July because that is when the bears are out en masse. The salmon are running like crazy at this time, and the bears hang out at the falls for a feeding frenzy! This proved to be true for my trip, and I was blessed with seeing between 15-25 bears a day. I took my place on the platform, zoomed my camera on the bears atop the falls, and waited patiently to get that one.precise.Mangelsen.photo. The other visitors did the same. In fact, every time a salmon jumped in the direction of a bear, you would hear an onslaught of rapid fire camera clicks. The simultaneous clicks let me know almost everyone at Katmai had probably been inspired by the Mangelsen photo. If you haven’t looked it up yet, now is another good time to do so.

Though it took hundreds of photos (thank goodness we have digital photography!), I was finally able to secure what I dubbed “My Mangelsen Photo.” Certainly, it was so not of his clarity, so not of his quality, so not of his composition, BUT, it was a Mangelsen moment: a large Alaskan Brown Bear standing, mouth wide open, atop the famous Brooks Falls awaiting the lunch of a sockeye salmon who is flying helplessly toward his impending doom and into the jaws of the bear. Mission accomplished.

Actually, it wasn’t just a mission accomplished, it was a dream accomplished. A dream almost denied because it was on my “someday” list. Thankfully, I realized the universe could not grant me this wish no more than it could deny me it. It was purely up to me to make it happen, and I did! 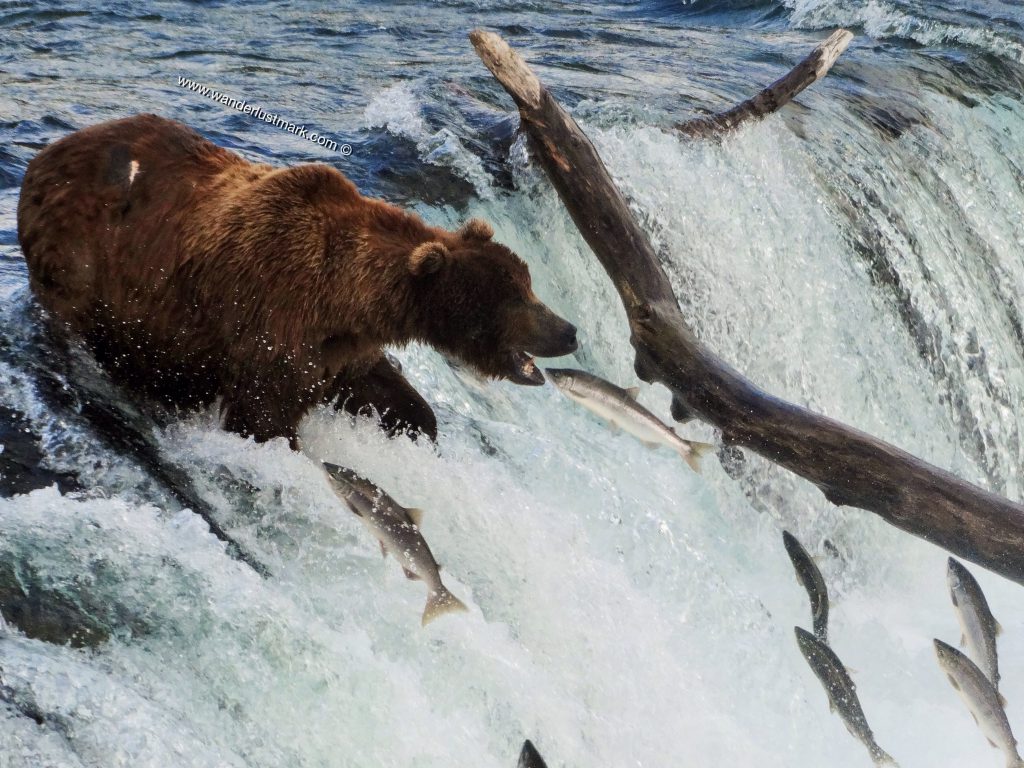 PrevPreviousSo You Want to be a National Park Junkie? How Do You Start?
NextWhy It’s So Hard to Give These DaysNext
Menu
Menu