You’ve got a serious case of wanderlust, and yet, the world is living through a historic pandemic. What do you do?

That’s exactly the situation I found myself in recently. I wanted so desperately to travel…somewhere…anywhere…..but I battled with myself whether or not I should. I’m sure many others have gone to war with this issue, too, and this internal battle we have all been fighting hasn’t been a fair fight. That’s because it’s not just about putting ourselves at risk; it’s about potentially becoming a “spreader” and getting others sick, too. Adding a layer of risk to others always seems to up the ante.

After checking the COVID19 news and numbers every day for weeks, I decided I could put together a short trip with minimal risk. I decided not to fly, to stay in-state, to drive my own vehicle, to bring food from home, to pack an abundance of PPE, to travel to a county with a low number of Coronavirus cases, to plan only outdoor activities, and to go where the crowds were not. I chose to head to southern Illinois, about five hours from my home, to visit Cave-in-Rock State Park and Shawnee National Forest. I also chose to travel on weekdays, instead of a weekend. I was hopeful these steps would allow me to travel while mitigating my risk of contracting the virus. So, off I went!

I first stayed at Cave-in-Rock State Lodge in one of their Duplex Cabins. The base fee was $109 a night for a Tuesday and a Wednesday. The lodge restaurant was not yet open since I opted to travel when Illinois was still in Phase 3. I stayed two nights because it was difficult to get lodging in the Shawnee Forest area at the last minute. My intent, though, for a three-day excursion, was to visit Cave-in-Rock Park for one day and then spend two days exploring Garden of the Gods and the Shawnee Wilderness. The drive from Cave-in-Rock to Shawnee was not bad at all (30 minutes), but with more planning time, I would opt to stay longer in the Shawnee area. The Cave-in-Rock cabin was big, clean, and had a wonderful back deck overlooking the Ohio River. It was peaceful and perfect. A weekend night, or a night where the outdoor patio was open, I imagine, would add a different energy and a different vibe. This time, though, the night was silent, the handful of cabins were not booked, and the stars were abundant. A perfect choice for a social-distance getaway.

During the day, I explored the famous Cave-in-Rock. From the cabins, it’s really just a short walk down to the shore of the river. The cave is worth seeing even though you could examine the whole area in less than an hour (there are other trails nearby, but I did not hike any of them). The popular cave has a unique history – some good, some nefarious. It’s a sizable geologic gem made of limestone and carved from time, erosion, and the New Madrid Earthquake. Make a note to look for the Cliff Swallows that fly in and out of the nests aligned on the face of the cave. There really wasn’t much else going on (especially during the pandemic) in Cave-in-Rock, but again, the cave itself is worth probing. Though I brought my own food, it seems that traveling to Elizabethtown, and dining at the E-Town River Restaurant, was the best option for dinner.

The plan for the next day was to hike in the Shawnee Forest. My itinerary included Lake Glendale, Bell Smith Springs, and Garden of the Gods. Even though Lake Glendale scored high in reviews, it didn’t offer much to me. I snapped a photo of the lake and left. There was a beach area with concessions, but due to the pandemic, it was not open. During better times, it would probably be a nice summer respite for a family. Next, I headed to Bell Smith Springs and hiked the Natural Bridge Trail. When I arrived by 9:30 am, I was only the second car in the tiny front lot. Typically a heavily-traveled area, I got in and out before the crowds arrived. The hike itself was fun and was comprised of traversing wooded paths, using rocks to cross streams, descending stone steps, and gaping at the surrounding rock formations. The one-mile, moderate loop trail is not clearly marked right at the start, but eventually, the yellow diamond blazes become visible every 120 feet or so along the trail. Unfortunately, while I enjoyed the hike, I never did see the “Natural Bridge.” There was a very dense lush vegetation throughout the area, and the bridge never revealed itself to me. Upon leaving, the crowds were definitely arriving. So, it’s best to hike early to avoid the afternoon congestion. There are other trails in the Bell Smith Springs System, but my trip was short, so my options were limited. After the hike, I headed to the Garden of the Gods Outpost and sat outside and ate my homemade lunch. The Outpost, a friendly store with a small menu and snacks, is at the entry to the Garden of the Gods and is worth a visit. It’s the closest you’ll get to the feel of a Visitor Center. Look around you for the images of Big Foot!

Garden of the Gods is the obvious draw to the Shawnee National Forest. I’ve heard about it for years, and I was happy to finally make it there. Though, I was surprised that the magnificent panoramic views of the rock formations and wilderness were just a few steps from the parking lot. I envisioned hiking through a longer, more arduous trail that would eventually pay off with these stellar views. Instead, I walked up a short set of stairs to a ¼ mile loop trail that delivered me to the Garden of the Gods. Short hike aside, the views are still stellar. It’s one of the most photographed places in the state (so I’m told) for a reason! The trail is paved with stone, so it is relatively easy to walk through the area, but there are some short, steep grades. You can climb upon the rocks and make the trail as challenging as you want, though. I climbed up a few because you simply have to; it’s part of the experience. Atop the sandstone rocks, you will have an incredible vantage point to view the unique rock formations and the miles of pristine Shawnee woodlands. Since this is the marquee attraction, it is crowded. I was there midafternoon on a Wednesday, and it was filled with people. I returned on Thursday for an early morning hike and again later for a sunset hike, and it was nearly empty at those times. Sunset over the iconic Camel Back rock formation is something to see!

So my first two nights were at the Cave-in-Rock Lodge, and my last night of lodging was with the Shawnee Forest Cabins. They are the closest to Garden of Gods and practically kitty-corner from the Outpost. I absolutely loved these newer cabins, and I wished I could have stayed there two of my three nights, instead of one. The cabin was $139 for the night and had a private hot tub. It was clean, nicely decorated, and included many kitchen incidentals for preparing your own food. The owners are very accommodating and even helped me secure the Cave-in-Rock Lodge cabin when I could only book their cabin for the one available night. If I return to Shawnee, this would be my preferred place to stay! The cabins, however, are just off the main road, so you’re not isolated or deep in the woods. For some that’s good, for others, it may not offer the full remote cabin experience. Some of the cabins do overlook a wooded area and a pond, so it can feel secluded. The stars were visible at night, and a plethora of pond creatures played out an amusing symphony of assorted sounds.

I had the opportunity to hike a few other trails in the area. One of my favorites was Rim Rock. I read great reviews on this trail, and it did not disappoint. I couldn’t believe, however, that there were only a few others on the trail. I have to believe this hike is more crowded during “normal” times. I was happy nevertheless. I was all about social distancing and recreating responsibly, and who doesn’t love a little solitude on a nature trail? This trail offers an upper and a lower trail, and they do connect via an impressive set of stairs, twisting and turning through sliced rock. I found it best to start on the upper trail, take the stairs down to the lower trail, and head back out to the trailhead. From there, you can once again access the other entry to the upper trail and finish out the upper loop retracing a portion of your steps. Neither trail is long, so it’s worth the slight retracing just to see it all. The other way to do it would be to do the upper loop and then do the in-and-out lower trail. If you’re more adventurous, these trails connect to the Pounds Hollow Lake Trail, too.

I returned to the Garden of the Gods Observation Trail area and investigated some of the other short footpaths that streamed from the main parking lot. Again, I was surprised at how short many of the paths were. Out of 10 trails listed on the Garden of the Gods hiking map, only two of them were over one mile. The trails were woodsy and included curious, seemingly misplaced rocks with awesome Liesegang Rings, making the mini-trails uniquely interesting.

One of the “long” trails in the Wilderness area is the Indian Point Trail. As a 2.0 mile loop, it was one of the few that had some “distance” to it. The actual “Indian Point” gives a nice cliff-overlook of the Shawnee Hills, but the more fascinating part of the trail was found further along the trek. The forest hike opens up in some areas to see large-scale boulders, pillars of rock dropped from main cliff facades, and plenty of caves to hike in and out of. It’s a natural playground! Be careful on this one not to veer off and follow the 160 mile River-to-River Trail. The Indian Point Trail is labeled with white diamond blazes and the trail number 108G. It has the feel of a rain forest, so bring water and bug spray.

There are other hikes in the area, but a short trip during a pandemic didn’t allow for me to fully investigate the other trails. If you’re looking to do a similarly short trip of 2-4 days, these hikes are perfect. Someday I’ll return to the Shawnee Forest to get the feel of the region when things are open and “normal.” Right now, I was 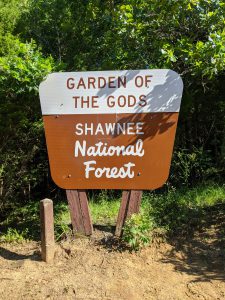 just happy to travel and to come home healthy!”