The Ones That Got Away

I’ve been fortunate to amass a nice collection of photographs from my travels over the years. Between myself and my travel companions, we’ve been able to capture some pretty cool images on film. Most impressively would be the bears, moose, bison, eagles, etc. that we encountered while in the national parks. Also, the iconic landmarks witnessed from place to place while traversing from Washington to Maine or from Canada to Mexico. I enjoy looking back at all of these images, truly grateful for what I have seen.

While leaving Mount Rushmore in Keystone, South Dakota, many years ago, we happened upon a group of hard-core bikers just making their way up to Sturgis, South Dakota, for the annual bike rally. We all converged upon a gas station at the same time. There had to be fifty bikers parked in front of the convenience store. I wished for the guts to ask if I could take a picture with them and their Harleys, but I shuddered at what their response might be. My cowardice cost me what I think would have been a really spectacular image of me, a woman in my mid-thirties, dark hiking shorts and a yellow tank top, along with fifty leather-clad bikers. I can see it in my head, but oh how I would love that photo today!

In 2010, we were feverishly making the hike up to Delicate Arch in Utah, trying to out-pace an impending storm. When we peeked around the red rock wall and feasted our eyes upon the iconic arch, we were stunned and flabbergasted. The arch is amazing, to say the least. So caught up in the moment we were, that it took us a minute to notice our feet were snapping as we walked, and our hair was standing completely straight up – everyone’s was! Almost simultaneously, we figured out that there was an electric current running through us. If lightning from the nearing storm were to strike, we would all feel the charge. Instead of snapping a picture of a group of people with hair straight up and the iconic arch in the background, we bolted (sorry for the pun) from the area and quickly made our way back down. The storm passed and we were able to climb back up for a picture with the arch and a rainbow, but sadly, we missed the opportunity of capturing our once-in-a-lifetime hair-raising moment! 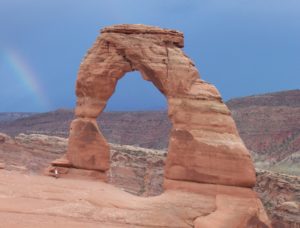 Glacier National Park is one of my favorites for seeing wildlife – especially if you are looking for bears. We’ve been fortunate, and we’ve photographed several black bears and grizzlies in the park over the years. The one that got away, though, we never even got to see. There were two of us hiking along a very isolated trail. The threat of bears was in the area, so we made sure to make loud noises and carry bear spray. As we were walking, we noticed a large group of hikers stopped about 100 yards in front of us. We wondered why they weren’t walking, but we just assumed they were concerned with the isolation and the threat of bears. Perhaps, we thought, they were waiting to hear our views about the trail. When we finally approached them, they were clearly anxious in their demeanor. They began to tell us of the mother grizzly and two cubs that were just feet behind us on the trail. The family crossed from one side of the trail to the other, pausing to watch us walk by. We never saw them or felt their presence. They were never threatened by us, and we were ignorant to the threat of them, thank goodness! But man, would I have loved that picture!!

I do have some great photos of some great things and some great places. They are images that I do, indeed, cherish. I just can’t help thinking, though, about some of the photos that got away. Those are memories I cherish equally, I just can’t share the proof of them with anyone.

Think about some of the ones that got away from you.