Small Thoughts at Large – Observations from the Beach

I just returned from a winter vacation where I temporarily traded the cold winds of Chicago for the warm sun of Ft. Lauderdale, Florida. While there, I registered some small observations. Here are my small thoughts at large about my recent beach vacation.

Observation number one: Tattoos are definitely the norm – I don’t know if tattoos are more the norm for beach-farers, who obviously are showing more skin, or if I missed Get-A-Free-Tattoo Day. I’m talking 8 out of 10 people have stamped their skin with some type of messaging or body art. I didn’t realize tattoos were THAT popular. Young. Old. Male. Female. Didn’t seem to matter. Tattoos were as visible as sun tan lotions were smellable! My apologies to the tattoo parlors and artists for suggesting this, but can the newly instituted soda tax be a tattoo tax instead? I think I saw more people tatted than I saw drinking soda!

Observation number two: Happy Hour is alive and well – I don’t know about other states, but my home state of Illinois banned Happy Hours for a long time. After 25 years, though, Illinois finally reinstated happiness in the Land of Lincoln again. There are still restrictions, however, and quite honestly, I don’t really see any advertised. In Ft. Lauderdale, though, it is very clear (I’ve heard), that Happy Hour is alive and well. Real Happy Hours, too! You can get half-priced anything, and you don’t have to order a plate of nachos you don’t really want. You.Can.Just.Get.The.Drinks. Every day in Ft. Lauderdale (I’ve heard), the bars were teeming with happy people. Oh, and get this, Happy Hour is really three hours! Most bars honor the so-called hour from 4:00-7:00 pm. Hmm…I may have to research this one a little more, you know, in order to substantiate my facts. In fact, I may have to continue this research on a state-by-state basis!

Observation number three: Boys like to dig in the sand – And by boys, I mean those aged 1-61. It seems that the male species is just drawn to play in the sand. All around the beach, there were young boys, dad/granddads with kids, and grown men (alone or in pairs) digging in the sand. Some built trenches, some castles, some buried each other. Whatever the preference, it was evident that males like playing in the sand. A few young girls dabbled (though usually with their dads), and I was hard-pressed to find an adult woman molding grains of sand. Must be a boy thing.

Observation number four: Girls like to collect sea shells – And by girls, I mean those aged 10-70. It seems that the female species is just drawn to search for that rare, unmatched, magical shell. There certainly was no shortage of women walking head down along the water’s edge. Some had nets, some buckets, some carefully cupped their most beautiful finds in their hands. Whatever the preference, it was evident girls like scouring for sea shells. Not many boys were collecting shells, so it must be a girl thing. By the way, I snatched up a coveted conch. Booyah!

Observation number five: People really do relax – The first year I decided to consider the beach as a bona fide vacation, I’ll admit I was nervous. I thought I could do a day or two at the beach, but really, who could spend 4, 5, or even 6 days just hanging surfside? Turns out, I can. Turns out, a lot of people do. My beach trip is now semi-annual, and I love it. I was worried I would be bored, or that I wouldn’t just be able to sit oceanside all day long, but I guess I can! It’s called relaxation. It’s a state of being completely stress free. You don’t worry about anything because when you’re beach-bound in swim attire, you can’t do anything about it anyway. So, you just let your mind be in the moment. You take in the waves, the winds, the birds, the sun, the sand, the clouds, the tide, and really nothing else. Except perhaps, people-watching, which I did my share of. Seems they did what I did: got a chair and an umbrella and just sat on the shore for hours at a time, adrift from worries and completely at peace. Yes, the beach, and all that comes with it, is a relaxing environment!

My next vacation will most likely include mountains as I am mainly a mountain girl, but rest assured, the beach will draw me back as well. 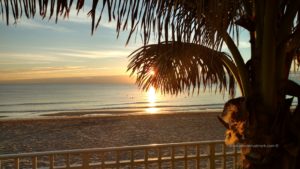 PrevPreviousThe Ones That Got Away
NextIf Our Country Were On Fire, What Would You Save?Next
Menu
Menu