Time, Tide, and Mother Nature Wait for No One

The recent shocking and devastating fire at the Notre Dame Cathedral in Paris was a strong reminder that nothing lasts forever. The Cathedral, of course, will be rebuilt, but to those who have never laid eyes on the iconic church in the French capital, they know they will never see the actual historical structure. It will be a reconstructed version. Sans the nearly-300-foot legendary spire.

This catastrophe made me consider other wonders some may never see. Whether it’s a sudden change like a fire, a hurricane, or a tornado, or a long-term process like years of erosion, many wonders, both natural and man-made, can cease to exist before we get the chance to marvel at them. In fact, as we order the items on our bucket lists, time and Mother Nature may already be fanning the flames over some natural wonders.

The truth is glaciers, volcanoes, rock formations, canyons, rivers, waterfalls, etc. all really are at risk of being reconstructed versions of themselves. We’ve learned time and again nothing lasts forever.

Take “The Sentinel,” an iconic hoodoo in Bryce Canyon National Park. This natural landmark succumbed to multiple freeze-thaw cycles and finally buckled in 2016. The Sentinel was a familiar site at Bryce that stood about ten stories high and seemed to touch the brilliant blue sky that always hung above the orange-colored canyon. When I look at my older pictures that show the Sentinel versus the more recent pictures that do not, the change is stark. Something is clearly missing, and the canyon just isn’t the same without its spiral protector. It saddens me that visitors today will never know the same landscape.

Glaciers are certainly at risk of receding or even of becoming extinct! It’s common to see a headline in the travel industry that goes something like this: If You’d Like to See a Glacier in Glacier National Park, Go Now! The message seems urgent, and it’s understandable. According to the National Park Service website, when the park was formed in 1910, over 100 glaciers were present. Fast forward to 2019, and only about 26 remain. The startling prediction now is they’ll all be gone by 2030. I was lucky to hike amongst these glaciers, but I wonder if future generations will get that same experience. Sadly, at this rate, it seems unlikely. 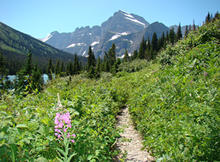 It’s not just glaciers that are disappearing either. Lakes and rivers, especially out west, are now miniature versions of themselves. Hit by a long-standing drought, recognizable waterways such as the Colorado River and Lake Mead are now, well, unrecognizable from years past. The water levels are at historic lows, and because of that, the landscapes surrounding them are also forever changed. If one did not visit these natural landscapes earlier, the opportunity, like the waters in the canyon, has dried up.

Changes in wildlife are also occurring, and consequently, the environments that house our wild critters are changing as well. Everglades National Park is probably visited mostly to see the birds and the reptiles, and not the mammals, but it’s important to note that because of the non-native, invasive Burmese Pythons now slithering through the park, the mammal population is quickly becoming extinct. These unwelcome predatory guests, on average, have dropped the raccoon, opossum, and bobcat populations by about 95%, and the rabbits and foxes have sadly disappeared. Yet another changing landscape is underway. Those that visit the Everglades today, aren’t viewing the same Everglades as just a few years ago. The environment will probably adapt and change, and eventually, will become a reconstructed version of its greater self.

There are so many natural wonders to see. It’s easy to pretend “they’ve been there for generations and they’ll always be,” but we cannot bank on that. Sure, erosion doesn’t happen overnight, but some of these natural landscapes have been fighting the stages of erosion for millions of years. I shudder to think of a Utah without the Delicate Arch. I cringe to imagine a desert with a flattened Monument Valley. I can’t imagine a Yosemite with dried up falls. I wince at the thought that the world’s longest-known cave, Mammoth Cave in Kentucky, could one day collapse. And I worry that the Yellowstone geysers will one day dry up and cease to erupt.

Yet, all of these are possibilities. Real possibilities. So, all I can do is encourage people – including myself – to go see them NOW! Don’t wait. Visit the glaciers, the geysers, the rivers and the swamps. Hike through the canyons and the caves and the hoodoos. Remember, nothing lasts forever. Experience as much as you can before reconstruction sets in.