The Roots of Wanderlust

First, some background: The name of my company is Wanderlust. However, due to the somewhat commonality of the word, my online presence (both the website and social media accounts) are under the moniker of Wanderlustmark. That combined the company name (Wanderlust) with my tagline, “Where Will You Leave Your Mark?” Hence, Wanderlustmark. I’m not a man named Mark who likes to wander, though, I believe some people believe that to be true.

Now that I’ve cleared that up, let me tell you a little story about wanderlust. The word. And what it really means.

The word wanderlust  is common to folks mostly in the outdoor or nature communities. It’s a German word that found its way into our English language to mean “a love to travel or wander.” That’s how most people seem to know it. But its German origin is even deeper than that.

I was in Washington State recently, and I was wearing one of my Wanderlust t-shirts. The shirt is heather orange, and the saying in warm grey print is “Wan/der/lust: A yearning to wander that starts with your SOLE.”

I was hiking a small trail at the Washington Pass Overlook, which is a stop along North Cascades Scenic Highway 20, near Winthrop, Washington. As I was walking, a rather tall man and his wife passed me, and I heard the man utter, “Ah, Wanderlust.” I could not detect an accent at that time, but I just knew, he had to be German. He said wanderlust  with such pride and with such passion, and I knew he had a deep connection to the word. More so even than other outdoor-minded people; more so even than I.

I turned quickly and said, “Ah, you must be German.” He nodded and agreed. He informed me that wanderlust  is a German term which carries great significance and symbolism. I also nodded in agreement. I told him that we adopted the word in our language and our culture, but that honestly, most Americans are unfamiliar with the term or at least with the true meaning of the term.

Wanderlust is derived from wandern, which means “to hike.” The term lust  means desire. The basic translation, then, is a desire to hike.

That’s much too simple, though, and I’ll do my best to try to interpret what I know of its origin.

Wanderlust  isn’t just a word. It isn’t just an expression. To the Germans, it is rooted in their history. It is part of their DNA. Part of their soul. It is a way of living life, and it is a way to see and think about the world. It’s about having a curiosity of the world and setting off on foot to explore it. It’s about connecting with nature and finding joy and personal happiness in nature. It is also about connecting with others and learning from each other.

Wanderlust brought me face to face with my German friends. We connected in nature and shared a moment. We spoke easily of the word that connected us and continued to share somewhat of who we each were. Our encounter lasted only minutes, but its impact and the memory of it will last forever. I have been marked by the breathtaking place where we met, and the fantastic people I met left their mark on me. To me, this encounter perfectly encapsulates wanderlust!

As a woman who proudly claims at least a quarter of German blood, I get wanderlust. That’s why it was important to me to have Wanderlust  as my company name. It was so good, too, to talk with this couple, who only deepened my respect for the German history of this word.

Thanks to my German friends. For their stories, their humor, their kindness, and for a moment and a picture that will last forever. Danke sehr! 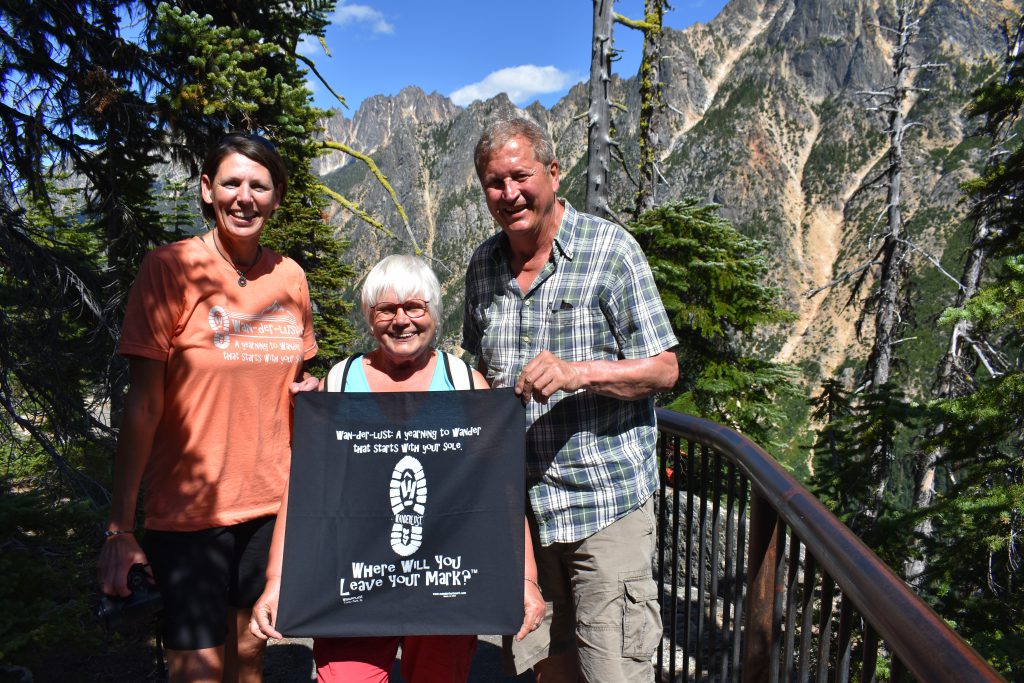 PrevPreviousTime, Tide, and Mother Nature Wait for No One
NextThe “Other Side” of Fort LauderdaleNext
Menu
Menu